In this weeks blog I will follow on from my last blog/report and try and breakdown the micro zones of Tarlabasi and offer my view of their future potential.

Currently, the Tarlabasi neighbourhood consists of three distinct small zones: the section that is closest to Taksim square (see map below A), where much organic property regeneration has already occurred, the Municipality backed regeneration zone (see map below B) in the centre where the demolition and construction of the real estate is underway and the last part being the lower area that lies closest to Galatasaray and the Golden Horn (see map below C). 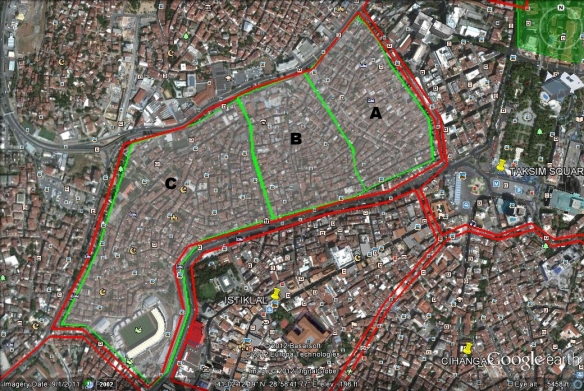 The areas all have a markedly different feel and will all no doubt be influenced by the project.

First of all, perhaps the easiest to predict will be the outcome in the project area (marked B on map). The project company has already set up a sales office on Tarlabasi Blvd and the prices they are quoting for the end product are $5000 per square meter, plus VAT. The brochures are full of glossy pictures of pristine buildings, with plenty of glass and steel and resembling the old style buildings with their signature bay windows ( http://www.tarlabasiyenileniyor.com/)

Currently being flattened and…….

….this is what’s going in

The project is mixed-use, with offices, hotels, commercial, and residential. At these prices, their target market is likely to be wealthy Turks, Western investors and wealthy Arabs. Rumour has it that the marketing is being heavily directed towards the Middle East. We have been buying a few properties on the outskirts of the regeneration for a few years and expect to make an exceptional return. We believe that there are still opportunities especially if you, like us, do believe in an extended price hike once the project is finished.

One of ours bordering the regeneration project

İn the area next to Taksim (marked A on map), there has been a small explosion of property restorations over the past 5 years. Walking through this neighborhood, you can already see the presence of at least twenty apartment style hotels, as well as various short-term residences. Side by side with relatively run-down buildings, these stand out with their newly plastered and painted exteriors. There is also a vibrant rental market here. İt is looking less and less like the old Tarlabasi and fast becoming more like a mini Cihangir everyday.

İn the final area (marked C on map), extending from main artery of Kalyoncu Street to Omer Hayyam the regeneration has been less rapid, but now with a couple of hotel projects underway, as well as the regeneration project itself, it seems set to take off. The prices here are about 20 percent cheaper than non-project Tarlabasi, so we feel it is the target for investment. İn addition, it is within a few yards of İstiklal Street and the highly trendy neighborhoods of Tunel, Galata, and Asmali Mescit.

Bargains to be had here

Needless to say, the mega project will bring much needed infrastructure to the whole Tarlabasi area which will enhance Tarlabasi greatly. Whichever way you look at it, it seems very likely that the area as a whole will smash through the current property price levels of $1250- $1500per square metre very soon and will head Northwards on a steep price trajectory for a good 5-10 years hence.

A stones throw North of Istiklal Street in central Istanbul lies the Tarlabasi neighborhood comprising of over a 1000 relatively small buildings and quaint townhouses. Many years ago these properties were inhabited by Greeks, Armenians, the Jewish community, and a host of other ethnic minorities. Created in the latter half of the 19th Century by the trading classes from these far flung places who dealt in the bazaars by day and in the evening returned to their families in the close knit Tarlabasi community.  Major political events led to the emptying out of these neighbourhoods and further events in Turkey, mainly massive inward immigration to Istanbul from the countryside, led to this becoming an area predominantly inhabited by Kurdish\Anatolian\ Roma (gypsy). The Tarlabasi neighborhood went into a long period of decline as the new immigrants did not have the financial means to keep the building stock well maintained. Many were also unaware of the original features in the properties and painted over, knocked down or otherwise degraded the historical integrity.

Up until the last 5-7 years, it appeared that the decay of the neighborhood was irreversible. It became a no-go zone for most Turks. It was the ‘Bronx” of Istanbul.

But then fortune’s wheel started to spin slowly in favour of regeneration. Brave local buyers with some International experience saw run-down neighborhoods abroad that were this close to the centre of a major city were subject to similar cyclical rises and falls and found the prices for this real estate in the city center too good to pass up. Also, due to the classical Greek, French and Italian architecture of the properties in the area, English men, mad dogs, and a few persistent French nationals started to invest in the future of this goth-land.

Tarlabasi has always been an interesting, yet controversy-plagued area. And throughout this so-called gentrification period ( I prefer the term regeneration), it has been no different.

The construction giant, Calik Holding, has joined forces with the Beyoglu Municipality and has purchased over 270 buildings over 8 blocks (Tarlabasi re-generation scheme www.tarlabasiyenileniyor.com/ ). The plan is to give Tarlabasi a massive face lift and raise its profile on par with many of the most chic neighborhoods worldwide. The mayor of Beyoglu, Ahmet Demircan, has called it Turkey’ s Champs De Elysee. Salesmanship and bravado aside, it is a mega-project the likes of which Turkey has never seen.

click on the master plan below for a larger view-

But, alas, as in the past, Tarlabasi has has been a harsh master and has often shone its light on some only to leave others in its shade. Many local residents have opposed the development, although it should be noted that many are also in favour of it, a lot have sold their properties directly to the developer. In an area where rumours spread like cricketeers on a patch of green on a mild punjabi afternoon, the municipality probably could have handled the PR end of matters with more aplomb.

There were lots of questions about where displaced peoples would end up. And some rumours persisted over the total final build area.

In any event, it is hard to imagine a perfect solution to the problems that have dominated this neighborhood for so long. As one local resident, Mustafa, said to me a couple of years ago, ” What should happen? Should nothing be done until the buildings turn to brick dust? Already, they are almost falling down on our heads. If something is not done soon, there will be nothing left to protect.”

In my blog next week, we will leave aside the thorny issues of the past and do our best to soothsay Tarlabasi’s future, however quixotic our enterprise may be.

Keith has lived in Istanbul and worked in the Real Estate business for the past 10 years, building up a personal portfolio of property. His knowledge of central Istanbul property is second to non. "There are no gimicks or shortcuts, it's all about being on the ground researching day in day out"
Contact - info@lilimont-istanbul-realestate.com